“Shut That Shitty Little Kid Up!”

Temper-tantrums are an unfortunate part of parenting (There. I said it. Even our sweet, angelic little Jacob is susceptible to them)

Let me go back though, because I distinctly remember being single and with my single friends at a restaurant where someone’s child was throwing a temper-tantrum. I remember as one of my friends started complaining that someone needs to “shut that shitty little kid up”. That was a pretty harsh thing to say – even though everyone at the restaurant was visibly irritated (there are few things more grating on the ears than the sound of a child screaming and crying. Seriously. They go dog-whistle sometimes), nonetheless, in my humble opinion, it’s not ok to say that about anybody’s kid. It’s never the kids’ fault. (Don’t believe me? Read on…)

There’s a lot to be said about kids in restaurants, and it’s not the point of this post, but I’ll say this: if you’re out before 7:30pm for dinner (you might be a senior citizen…), there’s a good chance you’ll have to deal with children especially if you’re at a chain or family-friendly restaurant (if this is the case and a child has a meltdown, shut up and try to ignore it). If, on the other hand, you have small children (this whole post is really about small children – if your kids are older, they should know how to behave) and you’re thinking of eating at a fancier restaurant and it’s around the 7:30pm hour – you should be slapped if you bring your kids. Leave them at home with a sitter. If you can afford the expensive meal, you can afford the help… (Besides, you guys definitely need the alone time. Don’t you? It can’t just be us…)

Children have meltdowns sometimes. This is a fact. It’s not because the parents are blundering idiots who spoil their “little angels” by acquiescing to their every desire (ok, sometimes that’s the case) – it’s because when children are little, they lack the frontal lobe development to properly process their emotions (look it up, it’s true). They’re like little cave men (or women) who live completely in the moment and have trouble discerning between “want” and “need”. If you think it’s irritating and hard for you – the onlooker – trust me, it’s much harder on the parents. When it happens, we have NO CLUE what to do. We’re embarrassed, and just want our child to behave and be quiet much more than you do. Trust me. Shooting us evil looks (or our child, for that matter) does nothing except maybe open you up to the full brunt of our wrath (we’re sleep-deprived parents – don’t mess with us; you have no idea what we’re going through). We’re helpless when these things hit.

Luckily for us, Jacob hasn’t had any major meltdowns in public.

But that doesn’t mean that he hasn’t completely lost it. I took him to visit my sister the other day. When it was time to go, he decided he didn’t want to get in the car. Unfortunately for him, that was not his decision to make. Unfortunately for me, he didn’t like that decision. He screamed like a banshee for 25 minutes. He screamed to the point of gagging – twice – and there was absolutely NOTHING I could do. I calmly told him that when he calmed down, we would talk, but until then, I had nothing to say (granted, this was after I turned on the radio, turned it off, sang to him and almost lost my mind and temper, but I digress)

I originally had a photo in here of Jacob in mid-meltdown, but Cherise hated it, so I removed it. (Don’t judge me. The couch is extremely uncomfortable…)

He finally calmed down, and when we arrived at Gymboree he had a great time. He completely forgot about his tantrum. I, on the other hand, was exhausted. 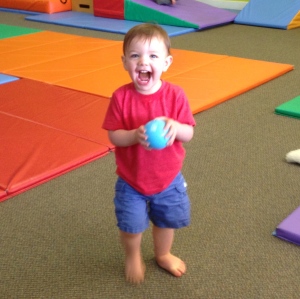 I guess what I’m getting at here is this: temper tantrums are an inevitable part of parenthood. We, as parents, must remember to stay calm (as hard as that may be) dig in, and weather the storm. You, as onlookers, must try to remember to be compassionate and try to remain calm as well. After all, we’re doing our best.

And before you start complaining and calling anyone a “shitty little kid”, remember that once upon a time, the kid melting down over there, was you.