Off To The Races…

Ever catch yourself comparing yourself to others? No? Me neither. I was, uh, just asking for a friend…

The truth is, we can say whatever we want, but just about everyone compares themselves to others in some capacity, at some point (or many points) in their life – their success, height, weight, skin tone, twitter followers – and it’s completely natural.

It’s wrong because no two people or situations are completely alike. Not even identical twins.

Ok, maybe identical twins. But that’s where it stops.

Comparing yourself or your journey to someone else’s journey and measuring your self-worth based on what someone else has achieved is absolute insanity. We all have our own journey to travel and we all have our own strengths and shortcomings. Some people are good at math, some are good at sports. Others are good at being creative, and others are good at, well, you get the point. So why are we compelled to compare ourselves to other people when it usually just makes us feel insecure and inferior?

In some cases, it’s because of our well-meaning, but sometimes misguided parents. *insert shocked face here*

Don’t run away just yet. I realized this while at Gymboree with Jacob yesterday. I was watching him run around and throw balls up in the air and I overheard a mother talking to another mother.

Before I go any further, please realize that I am in NO WAY criticizing this mother for what she did (or rather, said); it’s just that I realized something in that moment that shook me to my core.

Mom 1: “…yeah, he doesn’t have as many words as I would like him to have at this point. How many words does she have?”

Mom 2: “She repeats just about everything, but she has a lot”

In that moment, I felt like a sledgehammer hit me in the face. Mom 1 was comparing her child to Mom 2’s child. And both children were standing right there. I know, “but Adam, they’re just little kids, how much can they possibly understand?” – My answer: A lot. They pick up on everything. And I think this is where our need to compare ourselves comes from. We start witnessing it at such a young age that it becomes imbedded. It’s problematic on EVERY level.

First of all, boys and girls mature differently. All kids mature differently for that matter. I’m sure Mom 1 was just a little concerned because her daughter probably started speaking and walking sooner than her son (as girls tend to do), and I know that, just like Mom 1, we’ve talked to other parents about what their kids were doing as a way to reassure ourselves that Jacob was growing and developing normally, but here’s the thing:

As long as your child doesn’t have a serious developmental issue – which your pediatrician tests for at every check-up – who cares when they start walking or talking? When we compare our kids to other kids, all we’re doing is telling them that they need to compare themselves to others. How is that a good thing?

I may be a first-time parent, but it’s my understanding that it’s our job as parents to love and nurture our children regardless of whether they can spell and read and write by 17 months (prodigies aside, none of them can). It’s our job to let them develop at their own pace, and not instill the fear of God in them if they aren’t moving at the same pace as our neighbors’ kids. Every kid is different.

And if they do have a developmental problem, then as parents, it’s our job to get them the help that they need, in addition to loving them and nurturing them.

I remember reading a Baby Yoga book when Cherise was pregnant. It had images of little babies (9 months old and up) in Downward Facing Dog. They were adorable, and we couldn’t wait for Jacob to do it. Well, he’ll be 2 in a few months and he just started doing it recently. 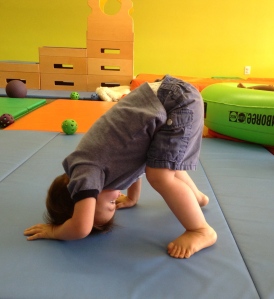 “I’ll get that headstand soon, dad!”

We have a friend who’s daughter can do a headstand. Don’t worry, I’ll get him to – just kidding!

We don’t. And I wouldn’t care if we did.

That’s the point, I guess. From here on out, as long as he’s healthy and hitting the milestones that our doctor is expecting him to hit, I couldn’t care less what other kids are doing or have done and at what age they did it. Jacob will do things when he’s good and ready to do them (except cleaning his room – he’ll do that when we tell him to)

Eventually, he’ll potty train, and read and write and do all the things that he’s taught. Until then, I’ll run around with him and scream with him and tickle him until he can’t stand it anymore. We’ll teach him to compare himself to his own past achievements. We’ll teach him that he can look up to people who’ve accomplished the things he wishes to accomplish, but that he should only compare himself to, well, himself. Because nobody else is him. It reminds me of a favorite quote of mine by Oscar Wilde:

“Be yourself. Everybody else is already taken.”