I took Jacob to a new park the other day (a really nice park in Burbank, actually) – my mom was in town and she wanted to get a manicure and get one for Cherise and my sister as well. I went along for the ride and to take care of Jacob while all of this went down.

When we got there, it was around Jacob’s nap time, so I figured I would walk with him in the stroller, he’d fall asleep and then I’d hang out while he slept and the women “had their nails did”. As we walked up the street – he was groggy – we came upon this beautiful park. As soon as he saw it, he pointed and got VERY excited. I asked him if he wanted to go and play (I already knew the answer, of course!) He was leaning out of the side of his stroller, so I brought him in.

The playground was covered so that the kids could play without being sunburned (a feature that should be in every park, I feel), the sand was very fine and actually pretty clean (as opposed to the random cigarette butts and water balloon shrapnel we often encounter elsewhere – seriously, who’s having water balloon fights while smoking cigarettes in a park?) and to top it all off, this park had toys! A dump truck, pails and shovels, toy cars (they must all have been donated by residents nearby) – Jacob was in heaven. He’s getting his four eye-teeth right now (if you’ve been through this, you know it’s no picnic) so he’s drooling incessantly and chewing on things when the mood strikes, so naturally, I had to be with him every second to make sure he didn’t chomp on any of the toys (don’t judge me – we have no idea where those toys have been or who’s been handling them). That, and the fact that he’s still only almost 1 and 1/2 years old… 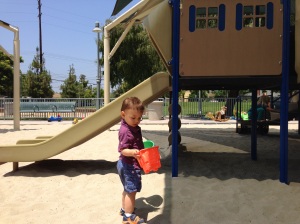 We were playing in the sand (something I recommend to everyone) and he was giggling as I poured sand out of the shovel on his legs and into a bucket, when these two girls came around us. They must have been 3 or 4 years old. One of them said “stinky baby!” I instantly started to feel defensive. Then the other one repeated it: “stinky baby!” They were actually taunting him. Jacob was oblivious and continued playing. I, on the other hand, was silently seething. (I know, they’re just kids. But to me, in that moment, they were snot-nosed little brats who were insulting my little buddy! Besides, Jacob smells terrific!) I kept my composure. After all, they are just little kids, right? But they kept right on calling him a stinky baby. We ignored them. I thought: “where are their parents? I would never allow Jacob to behave this way!”

Then one of them addressed me: “Excuse me, mister?”

“We want him to catch us”

“Oh” She said, followed by: “There’s a another kid” to her friend. And they left.

We played for a while longer and then Jacob got hungry, so we left. As we got back to the nail salon, I was still fuming a little (yes, I realize how ridiculous that is) so I told Cherise and my sister the whole story (my mom was on the other side of the salon, so I told her later). They got protective too, at first. Then they realized that the girls probably had a crush on him and wanted attention.

Holy crap. I guess that makes more sense. Why didn’t I think of that? Jacob is really tall. He looks like a 3-year-old. And, like I said, he smells fantastic!

When it comes to your kids, the tendency is to get very protective. This was a great lesson in remembering to breathe and try to see every side of a situation. Thankfully I didn’t react in the moment – it could have gone a lot worse…

Jacob and I left the salon to walk some more (they weren’t done yet and he still needed his nap) and we saw one of the little girls leaving the park with her parents. She waved and very sweetly said “Bye!”

Wow. Cherise and my sister were right. She must have just had a crush. I really shouldn’t have judged. When I was little, I liked a girl. A friend told me to go and give her a kiss. I went up to her and got so nervous that I bit her instead. Almost took a chunk out of her cheek.

I guess “Stinky Baby” isn’t so bad after all…

One thought on “Stinky Baby”