We took Jacob to Disneyland yesterday. (Before you start thinking that there’s nothing for a kid who’s only 1 and 1/2 years old to do there, think again. There’s PLENTY to do!)

What an amazing day! We had it all planned out – leave the house at 11:30am, Jacob naps in the car, get to the park around 1pm, play, then leave at around 7:30pm. Jacob falls asleep on the way back and we put him right to bed when we get home. Magic!

We were so excited to go! We ended up leaving at 12pm, and like clockwork, Jacob was asleep within minutes. Yes! The plan was working. He woke up as we exited the freeway in Anaheim. We were more excited for him than he could ever know. The best part? He had no idea what was in store for him! I couldn’t wait to live this day through his eyes! He would for sure be shrieking with glee all the live long day, right? Well, sort of.

We met our friend Allie and her daughter Evlana at the front entrance at around 1:45pm. Jacob was happy, but tentative. This was a whole new experience for him and I’m pretty sure he had no idea what was going on…

As we entered the park, he was all smiles. We saw Minnie Mouse and went to take a picture with her. Jacob just held on to her nose and almost pulled her head off (that’s my boy…). 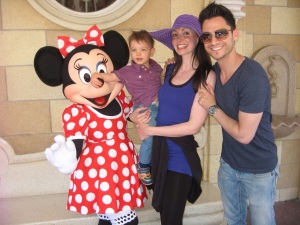 16 seconds before he almost pulled her head off..

And then I saw all the kids on leashes (no, not all the kids were on leashes, but a lot of them were). Very strange. I mean, I guess if your kid’s a runner? I don’t know…

We decided that our first stop would be “It’s A Small World” – perfect first stop for a first-timer. As we got closer to the line, Jacob began to be overwhelmed. In line, he melted down (so much for the perfect first stop). He didn’t know what to make of the music and people and set decorations. As we boarded the ride, he settled in and was fine. He liked it. Perfect. Disney would be a success!

Not a happy camper

After “It’s A Small World” we went to Toon Town. They have a covered outdoor park there for smaller kids to play. Jacob had so much fun. And Evlana was the PERFECT older sister! She was so good with him! They went down the slide together and she looked out for him wherever they went. It was absolutely adorable!

Yes, that’s me in the background… How cute are they?!?!

After the park we went to Mickey’s house. Jacob kept trying to make a break for it every time I put him down to walk. Until he saw Mickey’s washing machine. He really liked that! On the way to see Mickey, Jacob got side tracked by an airplane above us and was giggling and shrieking at the spinning propeller (he loves things that spin – ceiling fans, etc…)

We went to eat after that and Evlana was just so amazing – she entertained Jacob while we ate. Yes, I said it. Cherise and I BOTH got to eat at the same time, with Jacob at the table. All we could think was: “KA-CHING! Future babysitter!” All Jacob could think was: “KA-CHING! Future wife!” (OK, fine. We thought that one too. Hey, she’s a beautiful and sweet little girl and her parents are two of the kindest most awesome people we know – he could do A LOT worse, but I digress. He’s not even 2 yet. Holy crap I just became a Jewish mom…)

After we ate, we went to the carousel (this is Jacob’s favorite ride. Period.) As we waited in line to go for the second time, Jacob grabbed on to the bars of the security gate and proceeded to shake and pull (it’s here that I saw the thought bubble above his head screaming: “Let me in! Let me in! I NEED  to get on one of those horses!”) He always gets a kick out of ANY carousel.

From there we moved on to Disney’s California Adventure. We stopped by Cars Land – Allie’s husband Mark is an insanely talented person who works at Disney and is responsible for bringing Cars Land and A Bug’s Land to life. Wow – is all I can say. You really should go.

I’ll take a moment to add here that Jacob was already exhausted when we hit Toon Town. He was delirious when we got to A Bug’s Land! But, like a true trooper, he pushed on (more like we pushed him and he hung out in his stroller…) We went on Francis’ Ladybug Boogie (kinda like the tea cups, only not nearly as violent). He loved it! Then we went on Flik’s Flyers (it’s like the Dumbo ride where you sit in Dumbo and you’re raised in the air and the ride spins around and around, only instead of Dumbo, we were sitting in a Chinese take-out container). After the ride was done, I took Jacob off of the seat so he could walk off of the ride. He walked off and then turned around and climbed back on and back up on to the seat. He just wanted to go again. Disney was definitely a success!

Exhausted and ready for more!

He started rubbing his eyes (again), so we figured it was time to go.

Before heading back to the car, we bought Jacob a couple of t-shirts to commemorate the day (he hates wearing hats, otherwise it would have been Mickey Mouse ears).

We got him ready for bed and put him in the car (it was ok for him to miss 1 bath on a Disney day). Surely, he’ll be asleep instantly (we thought).

He stayed up for almost the entire drive home. He fell asleep as we exited the freeway for home and then woke up when we got there.

We gave him his bath and put him to bed.

And then we started planning his wedding.

Just kidding. We passed out after watching The Bachelorette (don’t get me started on how Cherise got me sucked in…)